All good adventures start with a plan.  My plan was simple.  I wanted to hike the entire length of Pictured Rocks, a national lakeshore that hugs the Lake Superior shoreline for more than 40 miles. Hiking the entire length of trail is not that big of a deal, in fact hundreds of people do it each year.  To accomplish this goal I knew I had to try something a little different, what I really wanted to do was to fast pack it in a day and a half.  Fast packing in simplest terms, means going fast & light. "Packing" also implies that a trip is long enough so you have to make camp, with items you carry, and sleep. Gaining in popularity, a small but growing group of backpackers are going lighter than ever before and travelling major distances in short periods of time. Fifteen to forty mile days are normal for these ultralight hikers. The energy saved from not being a human pack mule actually promotes a greater awareness of the beautiful countryside the trails wander through.

My goal was to carry a pack that weighed no more than 12 pounds.  These techniques of carrying this light of a load are often criticized for the lack of durability of some of the equipment or for being unsafe, but with improved gear from the manufacturers experienced users find the same practicality with less material and less weight.  Now let’s be honest, I have to say right up front that I am no Ray Jardine.  I do not subscribe to the theory of suffering to save weight- I wasn’t going to cut the handle off of my toothbrush, I would not be sleeping in a  hammock or under a tarp and a half of a sleeping pad is definitely not for me! 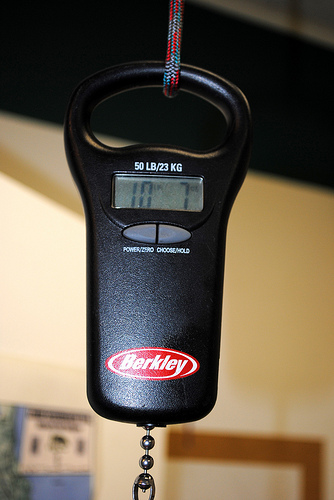 The first thing I had to do was to accumulate some of the lightest gear on the market.  I did some research and decided on the following gear to take on the trip:

*Clothing In The Pack-

For a complete trip gear review please click on each of the individual items. With the gear situated, packed and ready to go, I commandeered Nic Dobbs who was kind enough to run my car shuttle and drive me to the trailhead in Grand Marais.  We left Marquette after work, dropped my car in Munising and made it to the trailhead for a 5:45pm start.  My plan was to walk as far as I could through the night, and to accomplish this I brought a secret weapon.  Two small bags of delicious dark chocolate espresso beans were stashed in the hip belt pockets of my pack.  I figured these beans would keep me juiced up enough to be able to stay awake all night. I grabbed my trekking poles, popped a couple of espresso beans and headed down the trail.  The foliage along the trail was a brilliant lush green and the wildflowers were in full bloom.  Trillium, Dutchman’s Breeches and Spring Beauty lined the trail that wove through the hardwood forest leading me closer to the impressive Grand Sable Sand Dunes.  Thankfully the temperatures were cool enough that I barely broke a sweat, and more importantly there were no black flys or mosquitoes!  At the five mile mark of my hike, the trail pops out at the Log Slide, where Lumberjacks use to send their harvest of logs screaming down a wooden chute and into the waters of Lake Superior.  Legend has it that logs sent down the dry log chute would generate enough friction to cause the chute to catch fire. From the Log Slide you can view the five square miles of Grand Sable Dunes which are perched atop the 300-foot high Grand Sable Banks and were produced by the retreat of enormous glaciers. Traveling west the trail skirts the cliffs edge and offers spectacular views of the cliffs that drop 200 feet into Lake Superior.  With my caffeine induced buzz, I practically ran to the next Landmark the Au Sable Light House.  This light stands on Au Sable Point approximately 12 miles west of Grand Marais, and was built in 1873-1874. It was a bit eerie walking past the vacated lighthouse at dusk, and I kept a wary eye expecting some ghost keeper of the past to peek out from behind one of the curtained windows. After Au Sable Point the trail utilizes a dirt two track road from which I made pretty good time and deposited me on to the start of Twelve Mile Beach just as it turned dark.  I didn’t have to pull out my headlamp as the full moon produced just enough light through the clouds to enable me to walk the beach by the moonlight.  Twelve Mile Beach is…..well it’s twelve miles of beach!  The walking was difficult and I bounced between walking on the beach and heading up on the trail proper.  Each had their advantages and disadvantages- the upper trail being dark, sandy, and having to decipher the different trail junctions.  The beach had more light but offered no easy walking terrain.   My first official break since starting the hike was at the Gale Staples shipwreck which lies at the shore just west of Au Sable Point.  The ship laden with coal sank October 1st 1918 when high winds drove her off course and was grounded on a reef.  The hull provided the perfect platform and opportunity to refill my water bottle and rehydrate. Did I mention that Twelve Mile Beach is twelve miles of beach?  The first hitch to my plan was starting to develop.  Around 11:00pm I could feel my feet were developing hot spots due to the grueling sand walking so I made the decision to abandon my “all nighter” and bivy on the beach for a quick nap.  I found a perfect driftwood log to lay against, unfurled my sleeping back and laid down for what I thought would be a nice little snooze.  The problem?  My brilliant plan of dark chocolate espresso beans for fuel was back firing on me as it was impossible for me to fall asleep, I was jacked up on caffeine!  Add to that it was starting to rain and it was looking like it would be a long night.  I draped my rain gear over my sleeping bag to attempt to keep my bag somewhat dry.  For most of the night I lay awake listening to the small waves lapping at the shore and even caught a freighter on the horizon most likely heading to Marquette with its load of coal.  Eventually the caffeine wore off and I did get some much needed rest just before I watched the sun starting to rise out of Superior to the east.  At 5am I hit the beach and continued my trek determined to find out how far I had made it the night before.  Continuing my struggle of deciding which was easier walking- the trail or the beach.  Walking the beach I would think-“it has to be easier up there” then I would head for the trail and walk a bit and look down at the beach and think -“it has to be easier down there”, and that’s pretty much how the morning went, back and forth between the trail and the beach. Not use to solo hiking it’s fascinating on how a person’s mind can wander.  I found that step after step my mind would wander and inevitably it would turn to a song. Having talked to my good friend JD Disney the day before and discussing the world greatest rock band Air Supply, my mind hooked onto that conversation and all I could think of was the lyrics to “I’m all out of love”.   I spent a good portion of Twelve Mile Beach with that song stuck in my head! At a snack break I figured I had done close to 12 miles the day before, way short of my “all night” hiking plan and knew that today, with Mosquito Beach as my destination, it was going to be a long day.  I blasted through the rest of Twelve Mile Beach and had finally made it to the Coves where I prepared a late breakfast of mango, raisin and cherry oatmeal and basked in the morning sunshine. From Twelve Mile Beach the trail climbs up off of the lakeshore and travels along the cliff line and offers the traveler spectacular views of sandstone cliffs and the pristine waters of Lake Superior.  The hiking here was very enjoyable and I was accompanied by the drumming of partridge wings, the whistles of the white throated sparrow and the discovery of……..SNOW!  Yep May 19th and hidden along the trail and in the caves of the cliffs are the reminder that the Upper Peninsula accumulates a lot of snow over the winter season. For those of you that haven’t hiked this section of the park, the trail travels precariously close to the edge of the cliff and is not for the person with Acrophobia.  The benefit of having the trail so close to the edge is that it enables one to get amazing views of Pictured Rocks and Spray Falls is no exception.  Spray Falls plunges about 70 feet over the Pictured Rocks cliffs and directly into Lake Superior.  With the amount of rainfall this spring Spray Creek was swollen and an enormous amount of water was cascading over the cliff.  One of the most tragic shipwrecks occurred underneath Spray Falls when the steamboat “Superior” sank in 1856.  In heavy seas the boat ran off course and crashed on the rocks.  Passengers were washed overboard and had to swim in the frigid waters to shore.  Between 35-42 passengers died that day and the survivors had to walk to the nearest settlement and my destination- Munising!  Given the size of the cliffs, and add the heavy seas, and the time of year- October, I’m surprised anyone survived and vowed that I would not complain about how sore my feet were becoming.  The "Superior" now lies at the base of the falls in 20 feet of water. By the time I made Spray Falls and down to Chapel Beach I knew my feet were in trouble.  A combination of the extended beach walking, and damp shoes from the night rain was a perfect combination for developing blisters on both of my feet.  I still had four miles to go to reach my destination of Mosquito River and I was relying heavily on my trekking poles to assist my tender feet.  Having guided many trips to Pictured Rocks in the past, the trail between Chapel Beach and Mosquito River is my favorite as it holds the most amazing scenery in the entire park.  Fortunately I was able to keep pushing on by the shear fact that I wanted to see what was coming up next around the corner! I ended limping into Mosquito River campground at 5:30pm after 12.5 hours and 16.5 miles of exploring the lakeshore trail.  I immediately set up camp and cooked a delicious noodle dinner with a well deserved chunk of cedar cheese the size of a golf ball!  I was knackered so I lay down to rest a bit and ended up napping until 9:00pm.   Luckily, I woke just in time to gimp on down to the lake to enjoy some dessert of chocolate and to see an incredible sun set. Back at the tent I calculated that with my faltering feet, and 9 miles to go to my vehicle, I would have to be on the trail at 4am to be able to finish my trek and be able to make it to work on time that morning.  So at 4:03am with a headlamp lighting the way, I began hiking down a fog laden trail towards the Sand Point trail head and my vehicle.  Like the previous two days I didn’t see a sole on the trail.